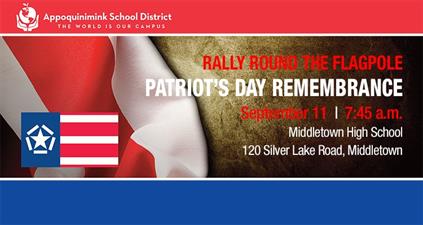 Middletown High, 120 Silver Lake Road, Middletown, DE 19709 – at the flagpole in front of the school 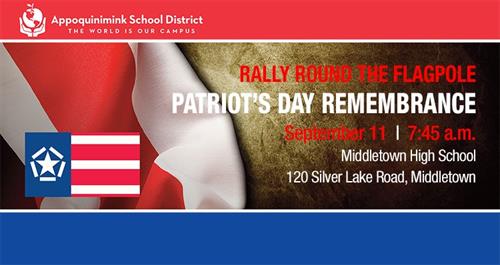 Middletown High School 9/11 Observance – join us as we raise the Freedom Flag
We are proud to invite first responders (police, fire, mobile medical aid), veterans, service members, elected officials, business and civic leaders, and members of the community to join us at the Middletown High School flagpole (in front of the school) at 7:45 a.m. for moving tribute to the victims of 9/11.  This annual event is organized by the members of the Air Force Junior ROTC Program.
Overview: Middletown High's Air Force Junior ROTC Cadets will continue an 18-year tradition by offering a commemorative event for students, staff and community at the flagpole in front of the school. Cadets will raise both the United States flag and the Freedom Flag to honor the 1,977 people who lost their lives and the more than 6,000 others who were injured at the World Trade Center in New York City, the Pentagon in Washington, D.C. and on U.S. Air Flight 93 in Shanksville, PA. (Note: In 2017, ASD became the first school district in Delaware to raise the Freedom Flag. Donors, led by parent/organizer Jason Wall, made a presentation to each of our schools with the official ceremony taking place at Middletown High. The Freedom Flag is now flown below the United States flag on 9-11 as a unique reminder to future generations about the victims, heroes and survivors of that day.)
• FREE Tickets: https://www.eventbrite.com/e/middletown-high-school-911-observance-tickets-71553312885
Symbolic elements of the Freedom Flag:
• White Star: Honoring all those who lived and died for freedom.
• Five White Bars: Representing the Pentagon and the organized protection of our freedoms.
• Top Red Stripe: Symbolizing the lives of those who perished at the Pentagon, and the crew and passengers on American Airlines Flight 77.
• Two Broad Red Stripes: In memory of those who perished in the Twin Towers and the World Trade Center, and on American Airlines Flight 11, and United Airlines Flight 175.
• Bottom Red Stripe: A tribute to the crew and passengers who perished on United Airlines Flight 93 in Pennsylvania.
• Three White Stripes: Signifying the rescue workers, firefighters, police officers, Port Authority employees, and others who worked tirelessly during & after the attacks.
• Blue "Ground": On behalf of Americans everywhere united together for freedom.
About Middletown High School AF JROTC
The mission of AF JROTC is to "Develop Citizens of Character Dedicated to Serving Their Nation and Community". The cadets serve their nation by volunteering their personal time in school and community service events.
The AF JROTC unit at Middletown High School was established in September 1980 and is the 2nd oldest JROTC unit in the state of Delaware. The unit is currently under the direction of Chief Master Sergeant Michael Conway (ret.). Their primary objective is to prepare cadets for life after high school to meet the challenges of a demanding and ever changing global society through developing today's youth into tomorrow's leaders.